Liverpool could be an option for Marco Asensio if he decides to leave Real Madrid this summer.

The 26-year-old’s deal runs down in 2023 and he’s made it clear he wants to have more continuity next season, in order to improve his chances of making it to the Qatar World Cup with Spain.

Los Blancos have offered a new deal to the attacking midfielder, but he’s refused to accept it so far. The La Liga winners will make him available in the summer market if he decides against committing his long-term future to the club.

That’s what Mundo Deportivo are reporting and they then go on to add the Spain international will not be short of offers, if he were to leave Carlo Ancelotti’s side.

After mentioning the clubs that have come forward for Asensio, Mundo then talk about Liverpool because of Jürgen Klopp. 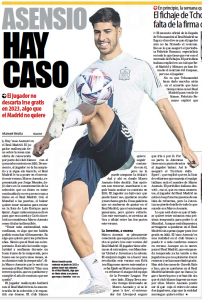 It’s claimed the Reds manager has been interested in him for a ‘long time’. If the player were to be made available, the German could ‘surely go for’ him.

The newspaper are talking about Liverpool as a possible option for Asensio mainly because Klopp has long been his admirer.

Mundo further addsthe player could risk staying at Real Madrid next season, without playing much, and then leave for free in 2023.