They start by recalling that Jurgen Klopp began being impressed with the Brazilian back in 2018, when the sides faced each other in a friendly match.

That’s when the manager asked the Reds to go for his signing, and even though that hasn’t happened in over two years, the chances of landing him seem to have returned.

Tuttosport takes the claims from the English press to say Liverpool never stopped chasing the defender, and an offer from the Anfield side could be on the way.

Even though Torino aren’t interested in letting Bremer go, they know the player could feel attracted by a move to Liverpool, where he’d play in the Champions League and make four times his salary in Italy. 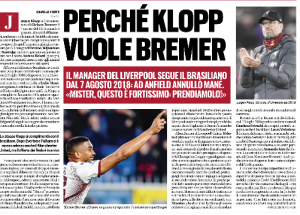 That’s why the Serie A side could end up offering him a new contract to make him forget about this interest. Along with Andrea Belloti, the 23-year-old is seen as one of the pillars in the club’s rebuild.