The Spanish media can’t make their mind up about Andreas Pereira and Valencia.

One week he’s set to be turfed out at the end of the season and sent back to Manchester United, and the next week a stay is possible. Sometimes it even changes daily.

Spanish newspaper AS have an article in their Tuesday edition which claims a stay is possible. Kia Joorabchian, described as the player’s agent, was in Valencia two weeks ago and left feeling the club will bid in the summer for a permanent transfer.

That’s what Valencia are said to have informed Joorabchian. From Pereira’s perspective, it’s explained he’s keen on a stay and has spoken to manager Marcelino who has reassured the youngster on his importance going forward.

AS state Manchester United have another year of contract with Pereira, so of course there’d need to be a transfer fee involved. 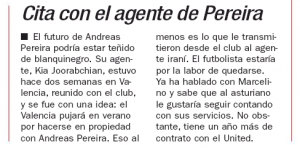 In Valencia’s last three matches since Pereira returned from injury he’s amassed a total of 18 minutes.

There’s only been 10 La Liga starts so far this season and it’s not too unkind to say the perception of the player in Valencia’s local media hasn’t been overall positive.

Therefore it’d be a surprise if Valencia are really keen to pay Manchester United a reasonable fee for the 22 year old. That said, Pereira’s move to Spain was a surprise in itself, after the player ruling out a loan, dismissing Valencia reports, and then doing it anyway.