The former Middlesbrough manager managed the English club for just over a year before leaving them in January.

Even though his contract did not expire, the Spaniard requested Forest to let him leave and the latter accepted.

When he left, the club were sitting seventh in the table and were in contention to make it to last season’s play-offs.

His departure from City Ground came as a surprise to many, but no detailed explanation was given as to why the 45-year-old left Nottingham Forest at that time.

Spanish newspaper AS interviewed Karanka and the first question thrown at him was why he decided to leave Nottingham Forest. 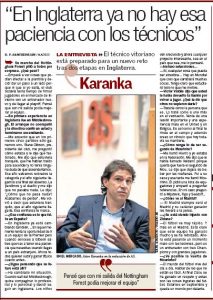 Responding to that, he said: “I started to see things that could affect the squad and decided to step aside because I saw that if I left, the club still had time to sign players in the winter market with a new coach and get to the play-offs. I thought that with my departure they could improve the team.”

Karanka’s comments could be considered as one of the rare occasions where a manager has publicly admitted he felt the club would be better without him.

Club said to have informed Liverpool signing will cost €30m –...