Jurgen Klopp is very much a man of the moment. The German manager not only saw his team knock Pep Guardiola’s Manchester City out of the Champions League, but also win the tie 5-1, winning both home and away.

This has greatly excited the German media, who don’t need too much encouragement to talk about Klopp. This time Bild have managed to get a chat with the Liverpool manager and aside from praising Guardiola as the best around, Klopp also dropped some insight on Anfield transfers.

Asked how Liverpool came around to signing Mohamed Salah, Klopp explained: “I already knew him from Basel. After that, we lost track of him a bit. But I also have to stress that we have an excellent scouting department. They always told us: Get him! The fact that Salah can play was seen at the latest when he played alongside Edin Dzeko at AS Roma.”

The German newspaper couldn’t then help suggest that Salah may be the next big player player to leave Liverpool, and there’s already been rumours, albeit very weak, about interest from Spain. 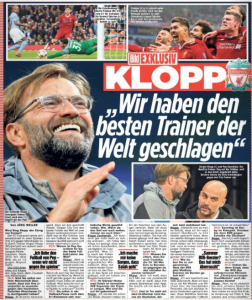 Klopp made it clear he doesn’t think such a deal will happen with Salah: “No. I know that Mo feels at home with us, and he knows that our playing style is totally his. I’m not worried about that.”

The Liverpool manager has said similar before, and it not turned out well, but there looks very little chance of Salah leaving Anfield this summer.