Wolves have been repeatedly linked with the AC Milan striker, entirely down to his agent being Jorge Mendes. The vast majority of the claims so far have appeared to be based on very little, but O Jogo’s Saturday slant has more to it.

Silva’s relationship with Gennaro Gattuso is covered. It’s explained that after the match against Arsenal, the Milan manager grabbed the striker by the arm and encouraged him to applaud the crowd, whereas Silva wanted to retreat to the dressing room immediately.

The 22 year old had come on with 20 minutes to go, and O Jogo believe he did well and was disappointed to get so little time. Silva has scored 6 goals in the Europa League this season and probably hoped for a reputation boosting strike against Arsenal.

Gattuso is said to rate Silva and sees him as an important player for next season, and he’s also going to give him more chances this campaign after being impressed in training. The manager has told Milan’s leadership about his admiration for Silva, but Jorge Mendes is agitating just in case. 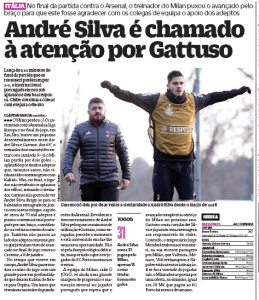 O Jogo say they’ve learned the agent visited Milan recently and ‘reminded’ the club that Wolves, Valencia and Monaco are ‘attentive’ to the player’s situation. Those are three Mendes linked clubs, so it’s likely the agent is trying to build a fallback option should Silva or Milan decide a parting of the ways is best in the summer.

Milan would want to make the €38m back they paid Porto for the player, however, it’s got to be considered unlikely a club would pay that. Should Silva leave, some sort of loan deal could be the likeliest scenario.