Jurgen Klopp’s Liverpool are mostly hailed for their attacking threat of Firmino, Mohamed Salah and Sadio Mane, but there’s a great deal of character in the side, something which is likely best personified by captain Jordan Henderson.

There’d been some worry around Anfield that the loss of Steven Gerrard way back in 2015 could leave a character hole, with some even mocking Henderson’s attempts to be a leader.

The former Sunderland midfielder had the best man to learn from, and lessons were also taken in by Dirk Kuyt, now a youth coach with Feyenoord.

Kuyt is a big fan of Gerrard, he’s talked about the Liverpool legend on repeat occasions, and the favour has been returned by the now Rangers boss.

The pair spent a lot of time together at Anfield, and it’s a period Kuyt remembers well. Not only that, it sounds like what he’s learned from Gerrard has impacted his approach to the game generally, and what he now expects at the beginning of his coaching career.

There’s one incident at Liverpool which stands out for the Dutchman, as a sign of Gerrard’s attitude and role as a team player.

Speaking to Dutch newspaper De Telegraaf ahead of Feyenoord’s Europa League match against Rangers, he said: “The most special moment took place when, just at the club, I saw a list of sixteen names hanging in the dressing room for the game selection. Gerrard was not among them. If that had happened to me at Feyenoord, I would have gone mad. Gerrard turned around, said nothing, went home and trained the balls from his pants (we’ll assume that’s a Dutch saying) the next day. He showed the only mentality needed to get the most out of a team.

“In the Netherlands, players always want to blame everything and everyone if they don’t play. Gerrard just accepted it. He didn’t want to let the team suffer. I have never forgotten that. Everyone should propagate that mentality to achieve the maximum 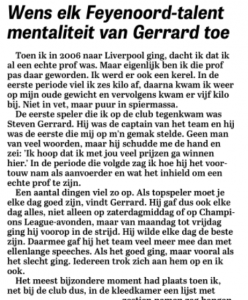 Kuyt went to say that having played with stars including Fernando Torres, Luis Suarez, Javier Mascherano, Xabi Alonso, Wesley Sneijder, Arjen Robben and Robin van Persie, Gerrard ‘in many ways’ is the most special.

Their Liverpool bromance has clearly continued.