Rangers face Feyenoord in the Europa League this week and the Dutch focus is largely on Steven Gerrard.

The club’s manager is of course well known around the football world from his time with Liverpool, and Gerrard moving to Rangers has helped up the profile of Scottish football.

During the period Rangers were out of the Scottish Premiership, and there was subsequently a lack of matches against Celtic, interest outside of the country dipped somewhat, and now it’s regaining the coverage.

Dirk Kuyt has been speaking to various Dutch publications about the upcoming match, and of course Gerrard is a big part of the chats. The pair were together at Liverpool, and Kuyt, currently working as a coach at the Eredivisie club, is clearly still a big fan of his former teammate.

He writes a regular column for De Telegraaf, and this week’s edition looks forward to the Europa League match between Rangers and Feyenoord, but has been taken over by Kuyt’s respect for Gerrard.

Kuyt explained: “A number of things stood out. As a top player you have to be good every day, thinks Gerrard. So he also gave everything every day, not only on Saturday afternoons or on Champions League evenings, but from Monday to Friday he led the fight. He wanted to be the best every day. With that he gave the team much more than with lengthy speeches. If it went well, but especially if it went bad. Everyone was drawn to him and so was I.

“I have been able to play with many big players at Liverpool. With Torres, Suarez, Alonso and Mascherano. In the Dutch national team with Van Persie, Robben and Sneijder. But in many ways, Gerrard has remained the most special player for me. He also had everything. Could give a pass over 40 meters, tackle, score, it was sometimes not normal. 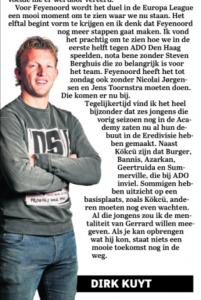 “I look forward to meeting him at Rangers-Feyenoord on Thursday. Also because he spoke about our friendship last week. He didn’t have to do that, but I felt honoured by it.”

The Dutchman also spoke about several youngsters making their way from Feyenoord’s youth ranks, and stated: “I would like to give all of those guys Gerrard’s mentality. If they can do what he could, nothing stands in the way of a bright future.”

‘Transfer alarm’ in Bundesliga as Mourinho wants to poach – Four...

West Ham ‘vying’ with club for experienced midfielder – Player to...