Home Europe Club hope to have Man United player in their stands on Saturday...
SHARE

Ashley Young’s potential move from Manchester United to Inter Milan is picking up pace, and it seems we have Romelu Lukaku to thank for it.

Young has emerged as a target for the Serie A side over the last week, with them on the hunt for a left-back this month.

Reports from Italy have claimed he already has an agreement in place with Inter over a move, although there is no deal with Manchester United at present.

Corriere Dello Sport back up those claims today and report that Lukaku has proven key to the whole affair.

According to the newspaper, he has ‘convinced’ Young to end his time in Manchester and try a ‘new adventure’ alongside him at Inter.

After this, Marotta Anzi reached an agreement with Young for a six-month contract, which includes an option for next season should the full-back make a certain number of appearances.

A deal is not close as yet, though, because Manchester United do not want to let Young go. Their ‘first response’ to his entourage asking for the move was negative.

That is not the end of it, though, as Young is ‘determined’ to get his move and will talk with Manchester United manager Ole Gunnar Solskjær personally to sort it out. 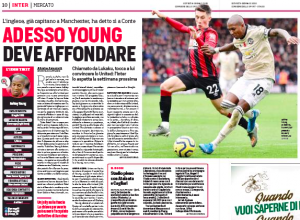 Inter hope to have him in the stands for Saturday’s match with Atalanta, and it would be considered ‘good news’ if he were available for training with the club as early as next week.

United are stalling on letting Young go because of their injury problems while another significant complication is Inter’s finances.

They have ‘no intention’ of paying for Young and have made that clear to the player, who will have to negotiate a departure from Manchester United to get his move.

At the moment Giuseppe Marotta, Inter’s CEO, and their sporting director Piero Ausilio don’t intend to get involved, but they are ‘ready’ to use the relationship they built with United doing the deal for Romelu Lukaku to their advantage.