As things stand, with Chelsea fifth in the Premier League, four points behind Liverpool, and at a disadvantage in the Champions League, Antonio Conte’s future at Stamford Bridge looks rather bleak.

The rumours suggest the Italian will leave his job (or be forced out by Roman Abramovich) come season’s end, meaning he’ll be available for many clubs (or nations).

Paris Saint-Germain are said to have expressed an interest in his services, but there’s also a very good chance he could return as manager of the Italy national team.

Well, we say very good chance, but Gazzetta dello Sport have it at 30%, which is the highest they give anyone, putting on the same level as Roberto Mancini. 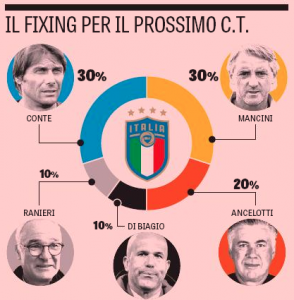 Also in the mix are Carlo Ancelotti at 20%, Claudio Ranieri with 10%, tied with Luigi Di Biagio.

Conte hasn’t exactly hidden the fact he could return, at some point, to try and lead his country to international glory, but as long as he’s under contract at Stamford Bridge, that’s where his focus is.

We’ll have to see what happens over the next few months.