On January 30th it was reported in Spain that Emi Martinez was on his way to sign for Leeds United.

The Arsenal owned goalkeeper is on loan at Getafe for the season where he’s playing back-up to Vicente Guaita, and Leeds were said to have made a swoop.

It was all presented as matter-of-fact, but obviously the move didn’t come off in the end. That’s not to say the claims were complete nonsense, someone dreaming up Martinez swapping a Getafe loan for a Leeds one isn’t exactly believable.

There’s been nothing reported on the situation since then, but now Martinez has confirmed offers and explained why he chose to stay at Getafe.

Marca quote the goalkeeper as saying: “I had many offers, but in the end I decided to stay for the big group here.” 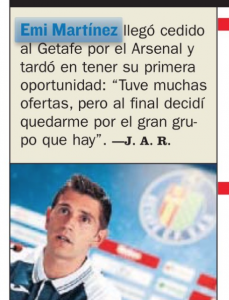 Martinez has since got two games with Guaita out through injury, but now he’s back on the bench.

Perhaps the likeliest reason Martinez didn’t move to Leeds United or elsewhere is that Getafe were concerned Crystal Palace could pay Guaita’s clause at any point before the window closed.