Home Europe Isco confirms he’s picked up a knock, Madrid in trouble ahead of...
SHARE

Sunday was a very bad day for Real Madrid. The current La Liga champions were beaten 2-1 by newly promoted FC Girona, and the Catalan media have gone wild.

With everything that’s happening outside of football, that Catalonia’s Girona could beat the big visitors from Spain’s capital is of course huge news. Even Carles Puigdemont has tried to get some capital out of it via social media.

Raphael Varane came off early against Girona and whilst Real Madrid are saying it’s only minor thigh discomfort, the Frenchman’s record suggests an injury layoff has been on the way and it’ll be no surprise if he misses the Tottenham match.

Real Madrid’s one bright spark ahead of the Spurs match, a reason for optimism, is that Isco played very well again, scoring the opening goal. Travelling to Wembley with Isco in top form is a boost for Zinedine Zidane as he works out a way to beat Mauricio 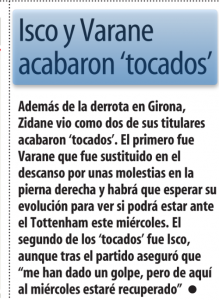 What doesn’t help is that Isco has picked up a knock, according to the player himself. Mundo Deportivo quote the Spanish international as saying: “I’ve had a knock, but I’ll be recovered by Wednesday.”

That’s what Zidane hopes, but the idea of Isco being a possible doubt for the Tottenham match, or carrying a painful knock, is another reason for Madrid pessimism.

Tottenham, on the other hand, would take the boost of Isco missing out.