Milan being interested in Cesc Fabregas is nothing new. They’ve wanted the Spaniard for the last couple of years.

Unfortunately for them, the midfielder was under contract at Chelsea, and would have cost them more than what they wanted to pay for him.

This time, as Corriere dello Sport explain, it’s different since he’s available on a free from January onwards, and he’s going to need a club come June.

In fact, the Italian newspaper reveal that intermediaries working England have started offering the 31-year-old around, targeting clubs like Milan.

Corriere state they approached Leonardo, the Serie A club’s new director of football, and presented the Chelsea man on a two-year contract with an option for a third should all go well, all at a ‘moderate’ price. 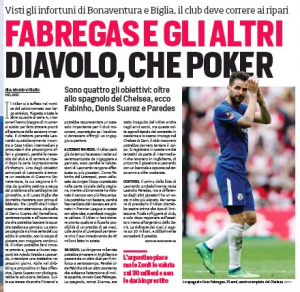 Having played in both Spain and England in his career, Fabregas could see this as the perfect time to try something different before either retiring or heading somewhere a bit more exotic, like Xavi or Andres Iniesta have done, to finish his career in the sun.

For now, it just seems like agents testing the waters ahead of the decisive final six months of the Chelsea midfielder’s contract, but having played just 48 minutes of Premier League football under Maurizio Sarri, it’s fair to say his future probably isn’t at Stamford Bridge.