Inter Milan and Juventus have joined Roma in the race for Manchester United defender Chris Smalling.

Gazzetta Dello Sport report that Roma are keen to secure Smalling on a permanent deal after his impressive performances on loan there this season.

Indeed, they’re ‘ready’ to put €15m on the table to try and get a deal done with Manchester United.

However, that is likely to be rejected as United do not want to accept less than €20m for their man and won’t move from that asking price.

Ole Gunnar Solskjær stated this week that Smalling will return to the club next summer, suggesting they would be happy to have him back if their asking price is not met.

It means ‘the games are open’ and both Inter Milan and Juventus are also looking at the centre back, who has been one of Roma’s better players this year. 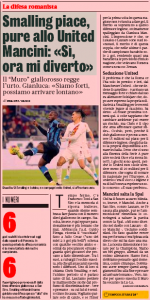 According to the claims, Smalling has made it clear he would be happy to return to Italy permanently as he ‘dreams’ of making a return to the England set up.

That may now be more likely if Inter and Juventus are interested and willing to pay United’s asking price.

At this point, though, his focus will remain on Roma and convincing them to stump up the extra €5m that United are demanding.