It’s been announced multiple times already by various members of the Italian press, but this summer is the one where Kalidou Koulibaly is finally expected to leave Napoli for greener pastures.

His next destination remains a mystery, but the general consensus is he’ll either end up in the Premier League or in Ligue 1 at Paris Saint-Germain.

Regarding his landing spot in England, Corriere dello Sport on Thursday explain it’s likely to be the north west, but the question remains whether it’ll be Manchester United or Manchester City.

It’s pointed out Ole Gunnar Solskjaer’s side were the last ones to make an ‘indecent’ offer of £108m, which is the famous one Aurelio De Laurentiis loves boasting about rejecting, but it mustn’t be forgotten that Pep Guardiola and co. have ‘constantly been in the shadows’, waiting.

They push the idea that this summer ‘could see a derby’ between the Old Trafford and Etihad sides for the centre-back, who has struggled with injuries this season for the first time in his career. 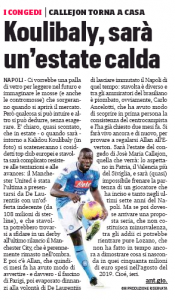 Furthermore, Corriere explain Napoli will ‘find it hard to resist to the temptations and advances’ from big clubs for the Senegal international.

There’s very rarely smoke without fire, and it looks like Manchester United and Manchester City hovering is the perfect fuel for what could end up being a big blaze in the coming months.