Chelsea and West Ham have both made bids for the signing of Estoril winger Chiquinho, according to claims from Portugal today.

Record says the Blues and Hammers are both keen on the 20-year-old, but it’s really the Stamford Bridge side who should win this race.

It’s claimed that Chelsea have offered the player ‘more attractive conditions’, which should make the difference against the competition.

The outlet sounds pretty confident that the move is happening, even though there are no details of how much the Blues are paying for the signing. 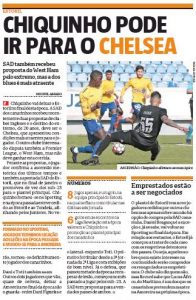 Chiquinho left Sporting’s academy to join Estoril’s youth ranks at the start of this season.

He’s made only eight appearances for the first team, which plays in the Portuguese second division, getting a goal and an assist so far.

It sounds quite unusual that Chelsea and West Ham would both be making bids for a player who barely gets minutes in the second tier, so we shall keep an eye on this story to see what’s really going on there.