When Manchester United were about to sign Bruno Fernandes from Sporting in a €55m deal a year ago, several reports said the negotiations were taking so long because the Red Devils weren’t sure about spending that much on him.

Well, 12 months have passed, and the midfielder now holds a record of 27 goals and 17 assists in 49 matches for the club. We can probably say that transfer was already worth it.

So as Record journalist André Veríssimo brings his column with several topics today, the main headline goes ‘And now, how much is Bruno worth?’

The piece shows the midfielder’s stats for Manchester United so far, claiming the more the player shines, the worse the deal made by Sporting president Frederico Varandas looks. 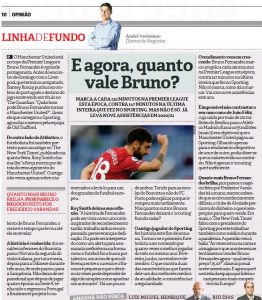 The story recalls that not long ago, Frederico Varandas told the New York Times that Bruno Fernandes would be worth a let loss during the pandemic, as the transfer market was hit.

The author, however, points out that Manchester United are currently on top of the Premier League table, ‘the most competitive league in Europe’, which means that regardless of the outside scenario, Bruno Fernandes has a much bigger market value.