If you’ve followed the Arsenal rumour mill over the past couple of weeks, you’ll be aware that Fiorentina want Lucas Torreira.

They already did in the summer, but the Uruguayan went to Atlético Madrid instead, where he was meant to help compensate the departure of Thomas Partey to the Emirates.

However, instead of being a regular, the midfielder has been a bit-part of Diego Simeone’s plans, and there’s a feeling he should look elsewhere for regular football.

That’s where Fiorentina come in, and two newspapers continue to maintain an interest from the Serie A side for January.

Corriere dello Sport are one of them, explaining the Italians ‘continue to monitor’ the Uruguay international, but ‘time will be needed’ for anything to take place. 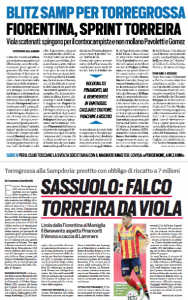 This is somewhat echoed by Tuttosport, who mention a ‘sprint’ from Fiorentina to sign Torreira, explaining ‘the indiscretions’ regarding the ‘arrival’ of the player in Florence are ‘multiplying’.

Far more optimism from the latter then, but it’s worth keeping in mind they tend to be a bit more extravagant than their counterparts.