Earlier this year, there was a time when the Portuguese media was saying that all the Sporting captains William Carvalho, Rui Patrício and Adrien Silva had asked to leave the club.

As Patrício is the oldest and also a goalkeeper, he was expected to be the cheapest one, with his price not being much more than €20m.

But it was still laughable when Watford and West Ham were linked to him a few months ago, because the report said they wanted to take him for €9m, a price which Sporting would never accept. 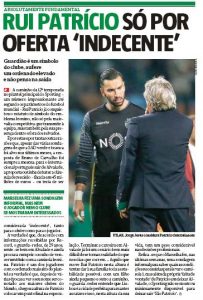 It was also strange how the links disappeared after that, especially for Watford, who seemed to have a real interest in him.

Now Record comes out with a story today saying Patrício is staying, because he loves the club, and would also like to remain in Lisbon.

Besides his desire, there’s also Sporting’s. Club president Bruno de Carvalho would only sell him for an ‘indecent’ offer, which would be of the player’s €45m release clause.

It makes thing look so much harder for Watford, even though we doubt Sporting may happily take €30m for the keeper.