Home Europe Which part of him is that for? West Ham and Watford offer...
SHARE

Some recent rumours from England have been claiming both Watford and West Ham are interested in Sporting goalkeeper Rui Patrício. As always, the Portuguese press loves it and covers every single update.

But the stories haven’t been very encouraging. A Bola has a short paragraph on this gossip today, and they claim that the €9m that these clubs would offer isn’t anywhere near high enough to convince Sporting.

It has to be considered that A Bola consider Sporting a much bigger club than either West Ham or Watford, and suggestions of such an offer for Portugal’s Euro 2016 winning goalkeeper are met with confusion.

Patrício has been linked to a move out of the club for over a year now, but from the stories we’ve covered, it seems Sporting haven’t entered into concrete talks at any stage. 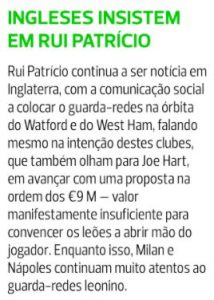 The goalkeeper has never hidden his desire to play abroad, but it wouldn’t be very easy to sign him. Recent reports from Portugal have said Sporting would demand at least €20m, but we can definitely see them asking for more.

Patrício’s release clause is €45m, so A Bola are well protected if West Ham and Watford show up with €9m. The Portuguese club may end up asking what part of the goalkeeper that offer is for.