On Sunday we covered a report from Portuguese newspaper O Jogo about Arsenal interest in Gelson Martins.

The Premier League club were said to be battling with AS Monaco to loan the Portuguese attacker for the rest of the current season, and had made an ‘important proposal’.

In the summer, Gelson rescinded his contract with Sporting following attacks at the club’s training ground. He then signed for Atletico Madrid as a free agent and has been at the centre of a legal battle since.

Unlike Wolves did with Rui Patricio, Atletico have failed to reach an agreement with Sporting over transfer fee, and are being sued for more than €100m.

Things haven’t gone so well on the pitch either. Diego Simeone doesn’t see Gelson as part of his core plans and numerous reports in the Spanish media say he can leave this month, along with Nikola Kalinic. 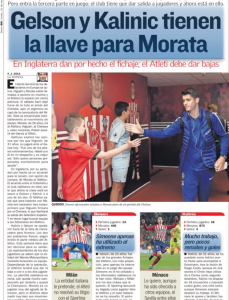 Monday’s edition of AS says finding new homes for Gelson and/or Kalinic is a key condition of Alvaro Morata arriving from Chelsea on loan. The agents of both have been told to find new clubs.

This is all rather perfect timing for Arsenal.

Online, AS cover the Gunners claims from Portugal, and again make the point of Gelson needing to move, and ABC also say the player needs to go.

Unai Emery could actually secure this deal without too much hassle.