When Real Madrid signed Eder Militao from FC Porto last summer, it was considered something of a coup, given that other big clubs had been interested in the defender.

That’s not to say there weren’t detractors and questions were asked of where Militao would fit into the team. When Sergio Ramos and Raphael Varane are fit it’s hard to see a way past them, and €50m is an awful lot to pay for a reserve defender.

So far this season, the Brazilian has nine La Liga appearances, and a further four in other competitions.

Marca have an article on his future today, and cover claims from England of an ‘important offer’ from Tottenham Hotspur. Jose Mourinho is presented as the man pushing for the Spurs signing, and that could make some sense.

Before Militao moved to Real Madrid, he was linked for some months with a move to Manchester United, or at least interest was claimed from the Old Trafford club. Mourinho 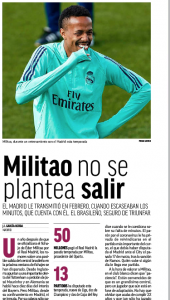 had been in charge at that time, and every Porto match was being scouted.

However, Tottenham’s chances are dismissed, with Marca saying Real Madrid don’t want a quick Militao exit this summer, and neither does the player.

The club still believe there’s a lot to come from the 22 year old, and would like to give him the chance to progress.