The Portuguese press continue to disagree with each other on the situation regarding Rangers striker Alfredo Morelos.

Sunday’s edition of O Jogo has some claims which make quite a bit of sense, and they rubbish the idea of a imminent transfer for Morelos to FC Porto.

One thing they can agree on in Portugal is that there’s some level of interest in the Rangers man, and there’s been multiple claims of Morelos’ agent being in contact with Porto and trying to build a personal terms deal.

O Jogo say signing Steven Gerrard’s player is currently ‘not a priority’ for Porto. They have other business to conduct, mainly potential outgoings, and would only move for the striker in July once their new financial year starts. 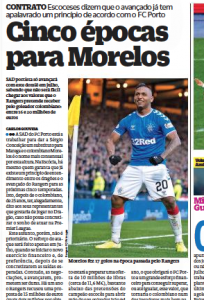 Therefore, no offer has been made yet to Rangers, and the Portuguese newspaper insists any transfer will be tough given the Scottish Premiership club are now said to be asking for €16-20m.

On top of that, Morelos’ wages are an issue.

O Jogo believe he earns around €2m a year, after tax, with Rangers, and it would take an enough to even match that.