When an Italian leaves Serie A for another country it’s almost always assumed they didn’t really want to go and will be back in Italy pretty sharpish.

Rumours will start within months, sometimes within weeks, about a possible return to the country, even if the player and those who represent him insist otherwise.

That’s been the situation with Patrick Cutrone since he left AC Milan for Wolves. In this case, it’s fair to say the player wasn’t hugely eager on the transfer in the first place, and it was Milan who packaged a beleaguered looking Cutrone off and sent him away to England.

Corriere dello Sport report he could be an option for Fiorentina in the January market. The Wolves player ‘might like a return to Serie A’, so he would be a possibility.

Fiorentina are looking for a loan signing which would also have a right of redemption, with the power to use that being at their end.

It certainly sounds optimistic and it’s unlikely either Wolves or Cutrone would be so keen. 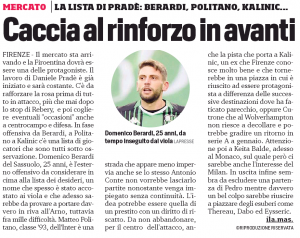 The 21 year old have certainly been a used part of Nuno Espirito Santo’s Wolves squad this season, with 291 minutes in the Premier League and 389 minutes in the Europa League.

He’s also made two appearances in the EFL Cup, and, altogether, has three goals and four assists to his name so far this season.

From Brazil: Everton tell Botafogo that an offer is on the way for 18 year old

Chelsea player has agreement with club for move – Blues potential...

From Brazil: Everton tell Botafogo that an offer is on the...