If there’s one man who has really suffered from Mikel Arteta taking over at Arsenal, it’s Lucas Torreira.

Almost immediately pushed to one side, the Uruguayan then saw Thomas Partey bought from Atlético Madrid, the same club the Gunners then sent him on loan to.

It didn’t go well, and a return to the Emirates took place, before Fiorentina swooped in to sign the midfielder on loan for the season, with option to buy included at around €15m.

That’s why Torreira is keen to impress in Florence, trying to recapture the form he previously displayed in Serie A during his time at Sampdoria in order to secure a definitive move away from Arsenal.

However, that’s not the only thing he is seeking in Italy this year, clearly affected by the way he was treated in London since the Spaniard took over.

Speaking after the 1-0 win over Udinese, he said, relayed by Corriere dello Sport: “It has been a busy week with three games, but Fiorentina have many important players and Italiano always tries to involve everyone.

“For my part, I try to give my best with the help of my teammates and the atmosphere, who have welcomed me here really well: I want to be happy here, and make the fans happy”. 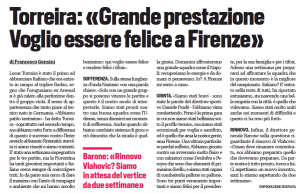 Whether he finds said happiness remains to be seen, but he played 83 of the 90 minutes against Udinese, which followed from a 65 minute involvement in the 3-1 loss to Inter five days prior.

He’s playing, his manager trusts him and he’s impressing along the way, meaning everything is currently on the right track, with Fiorentina sitting fifth in Serie A after six games.