With Chelsea facing Juventus this week in the Champions League, it’s obvious that Turin newspaper Tuttosport is going to be pushing a lot of stories about the Premier League club.

These won’t just be related to Wednesday’s match, and they’ve brought a story on an off-field battle between Juventus and Thomas Tuchel’s side.

That involves AS Monaco’s Aurelien Tchouameni.

Making his France debut earlier this month, the 21-year-old midfielder is catching attention around Europe. Tuttosport say Juventus are especially keen, and they feel the player fits their new plan of signing youngsters who can improve in the coming years, and see their value increase.

Juve are already making plans to convince Tchouameni they’re the club for him, hoping the will of the player can then help when it comes to dealing with Monaco.

However, they have a big concern over Chelsea, who it’s thought are also in the picture for the signing. 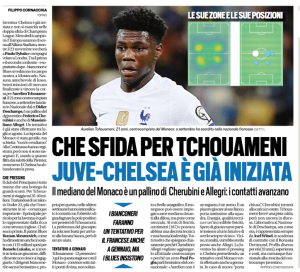 Tuttosport say that if Roman Abramovich really gets the desire for a player into his head, then Chelsea will be close to unbeatable in a transfer race.

Juve are therefore moving quickly, with a January approach to Monaco part of their plans.