Home Europe “I waited for the slightest chance” – Player speaks of disappointment after...
SHARE

Pablo Zabaleta has enjoyed a wonderful career as a professional footballer, picking up a bag of trophies at Manchester City to add to the Cope del Rey he won with Espanyol all the way back in 2006.

Following his City career, the Argentine went on to sign for West Ham and did a job for the London club prior to his contract expiring in June. The Hammers announced they wouldn’t be renewing Zabaleta’s contract and then it provided an opportunity for other clubs to come in for the 35-year-old.

Unfortunately for him, he hasn’t been presented the type of opportunity he’d like, and has subsequently retired from his playing career. Speaking exclusively to Catalan newspaper Sport he was asked if the decision was a difficult one, and replied: “It was a possibility to withdraw. I waited for the slightest chance to have a different experience elsewhere. But I was also not willing to move the family much again. And everything that happened with the coronavirus ended up forcing my decision.”

Fittingly, Zabaleta’s final match for West Ham was against Manchester City, and the South American feels it was an appropriate ending: “That that game was the last one is a good ending and it makes up a little all this bad feeling of leaving football in the middle of this pandemic, and having played against my former club, City, with whom I have a very special feeling.” 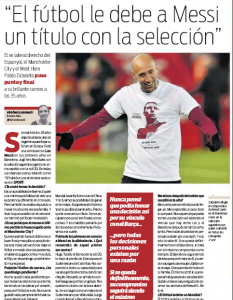 Given he was speaking to a Catalan newspaper, the chat eventually turned to Lionel Messi, with Zabaleta asked if football ‘owes’ the Barcelona player a World Cup: “Football owes Messi a national team title. He would finish it on a personal level, it is his wish. But it won’t change who was the best. Still the best. I would like to see him win a title with the national team.”

There’s no mention of it, but it would be no surprise if Zabaleta’s next stop after West Ham is a coaching position, given all he’s got to offer the game.