Home Championship “I was supposed to be in Leeds” – Player explains ‘agreement’ to...
SHARE

The 26 year old striker has gone through a difficult twelve months, struggling with injury and a collapsed move to Leeds United… well, two collapsed moves to the Championship club.

Attempts were made during the 2018 winter transfer window to take the player from Carpi, and when that didn’t come off there was a verbal agreement struck ahead of the summer.

Carpi spoke about it publicly more than once, and even when Leeds United appeared to be backing away, and the club’s local media insisted interest had dropped, the claims continued that a move was very much possible.

Concerns over the footballer’s knee issues, and Marcelo Bielsa having his own targets helped to kill things, and Mbakogu has been without a club since the summer.

Now fully fit he’s signed for Padova, who are bottom of Serie B, but it could have all been so different.

Speaking to Corriere del Veneto, Mbakogu was asked why he’s not a Leeds United player, and explained: “With Leeds I had an agreement in January, the agreement was 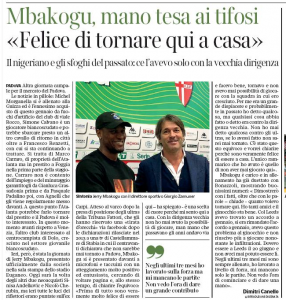 postponed to June, I had this knee problem and I could not play any more despite the interventions. I was supposed to be in Leeds on June 20th and I could never have been there. In the last three months I have always trained, I’ve worked at the level of strength, I miss only the games. I cannot wait to start and help.”

Whilst Leeds fans may not be too concerned the move didn’t happen, it’ll be nice to see Jerry Mbakogu back on a pitch and returning to being a highly rated Serie B performer.