That Brighton are interested in Karl Toko-Ekambi isn’t exactly a secret anymore, considering the Seagulls have now bid for him a handful of times, both last summer and during the January transfer window.

The Cameroon striker revealed that he, personally, had turned down the opportunity to go to Brighton prior to the season starting after Angers had accepted a bid for him, and the very same scenario happened once again a few months ago.

Speaking to Onze Mondial in France, the 25-year-old, who has scored 16 goals in 30 league appearances for the Ligue 1 side this season, opened up about what happened in January, and why he said no to the Premier League.

He said: “Brighton tried to buy me. They made an offer, they were very close to agreeing a fee with the club, and I refused to go. It can seem weird, and a lot of people asked questions, but I’m happy at Angers. I’m already living in football, I live well, I’m happy with my family. 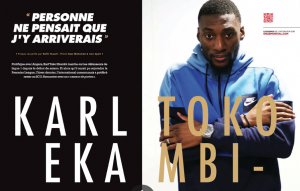 “Money isn’t everything. There’s different ways of getting money. It’s not the start that counts, but the finish. Many footballers have played for every club in France and now are in the regional leagues… If I don’t feel something, I prefer to stay in my comfort zone, and the idea of saving Angers from relegation was also in my head. I feel indebted to them. If money comes one day, it’ll come”.

A rather refreshing take in a world where a lot of players change clubs solely for the money, even if the challenge isn’t exactly what they would have wanted.

Of course, there’s a very good chance that Toko Ekambi will leave in the summer, but where remains the big question.

Borussia Dortmund have been touted as a potential destination once Michy Batshuayi returns to Chelsea, and that’s a problem for Brighton, who aren’t exactly safe from relegation themselves.