There was a time when Roberto Mancini was manager of Manchester City, and he was very interested in bringing Daniele De Rossi to the Etihad.

Now head of the Italy national team, the 54-year-old can openly talk about things that happened during his time in England, including when he came extremely close to signing the Roma midfielder.

Speaking to Il Messaggero, Mancini explained how it all went down.

He said: “We saw each other in Rome, we talked all night, everything was done, but he stopped it all right at the very end. He called me and told me “I won’t do it”. 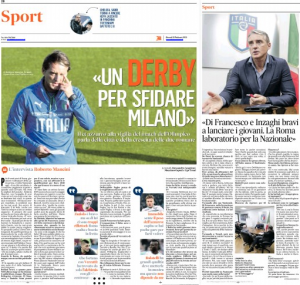 “I was hurt. I got angry. It’s been a long time since. Daniele was in the middle of his career, and he would have enjoyed it. I thought he was fundamental”.

Why De Rossi changed his mind isn’t revealed, and it doesn’t seem like he told the then Manchester City manager either.

Since then, the 35-year-old has continued to impress with the Serie A club, and is set to follow in Francesco Totti’s footsteps in only playing for Roma in his career.

During his time with the club, he has made 610 appearances, scored 61 goals and assisted 54 times.

Not a bad return for a youth product, and one Manchester City wouldn’t have minded having over the years had Mancini succeeded in his endeavour.