Over the past few months, we’ve covered the spate of exclusives from TuttoMercatoWeb regarding Abel Hernandez’s future and where the Hull City striker could end up when his contract expires in the summer.

The Uruguayan striker is currently recovering from a severe injury, and while he’s expected to return before the end of the season, signing a new contract at KCOM Stadium doesn’t appear to be an option for him.

The aforementioned Italian website has, thanks to a great relationship with his agent, been providing a monthly update of where the 27-year-old could end up next season, with clubs like Inter and Bologna said to be interested. 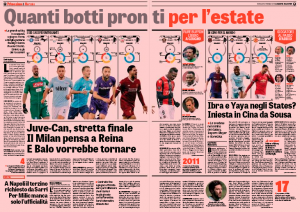 However, if Gazzetta dello Sport are to be believed, no offer from Italy has landed on the Hull City forward’s desk, yet.

The Italian newspaper state that Hernandez has received an ‘infinite amount of offers from the Orient’, and that he’ll ‘wave goodbye to England’ at the end of the season.

Genoa and Sampdoria have apparently made a move for him, and Inter are ‘waiting in the background’, but there’s still been nothing concrete.

Patience is a virtue and all that, right?