Home Europe Manager could be taking player with him to Watford, as Italian claims...
SHARE

While the Portuguese press continue to flirt heavily with Marco Silva so that he can take over at Porto for next season, their Italian counterparts seem to think he’s headed for Watford.

We covered their angle of Mazzarri’s departure last week, and the line from Gazzetta dello Sport then was that the Hull City manager was 99% guaranteed to take over at Vicarage Road.

Continuing with that train of thought, the Italian newspaper are now reporting that a favourite of Silva’s, Andrea Ranocchia, could also be following him to Watford. 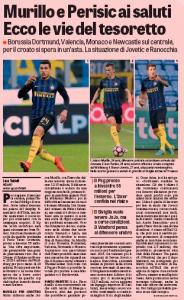 but was unable to help Hull avoid the drop.

With the Tigers unlikely to be able to convince him to stay for next season, and the player clearly enjoying himself in the Premier League, a return to England could very well be on the cards.

Whether it’ll be with Watford, however, remains to be seen, as it seems to entirely rest on Marco Silva’s next club.