Romelu Lukaku’s first half of the season at Manchester United has been a bit of a mixed bag.

Bought for more than £75m, the expectations surrounding the Belgium international were very high, and, at the start of the season, he met them.

Scoring seven goals in his first seven league games, it seemed like Lukaku was everything he promised he would be, but then came a long and very frustrating goal drought for the player and fans alike.

Criticism started piling in, with Twitter drawing endless comparisons to Chelsea’s Alvaro Morata, but he persevered, and the scoring boots have returned somewhat.

Attitude has never been Lukaku’s issue. He always knew he was going to start scoring again. It was just a matter of when.

This mentality is something he’s always had, as explained in Sport/Foot by some of his closest friends, Mulopo Kudimbana and Zouhair Essikal. 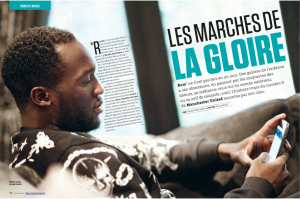 The former, a goalkeeper for Royale Union Saint Gilloise in Belgium’s second tier, explained the Manchester United striker’s computer is just filled with clips of some of the best players on the planet: “And he watches those on loop. He watches all the games. He’s called me many times to talk to me about my games for Antwerp and more recently with Union.”

Essikal expand on this: “To progress, I’m sure he uses the sporting mental imagery, which is the mental visulaiation of his activity. It’s a technique used by the great American athletes. Romelu understands everything when it comes to personal development.

“I use him as an example for the youngsters. You just need to see where he was five years ago with his ball control and where he is now. He’s never satisfied. He always sets himself higher objectives. I’m sure he’s aiming even higher than Manchester United. Even if that’s a bit difficult.”

Fans will always criticise, because that’s what they do.

In a way, they’re a bit like Lukaku: they’re never satisfied, always wanting their team to do better.

At the end of the day, that’s the mentality you want from your players, and the Belgian striker doesn’t seem like the kind of guy to rest on his laurels.