On Monday, when Il Messaggero decided to reveal Liverpool’s alleged interest in Kevin Strootman to the world, we predicted it wouldn’t take long before Manchester United were brought into the mix.

Lo and behold, Tuesday’s edition of the same newspaper did exactly that, stating José Mourinho was a long-time admirer of the Dutch midfielder.

Wednesday’s edition, however, seems to completely forget about the Red Devils, with the focus returning to Jürgen Klopp’s side, as Il Messaggero reiterate Liverpool ‘seem interested’ in Strootman, but there’s a bit of a hurdle. 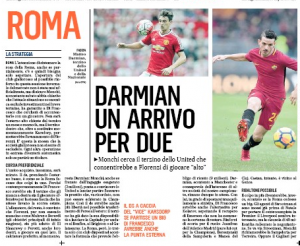 That obstacle is the midfielder’s €45m release clause, which Roma appear to want triggered if the 27-year-old is to leave the club.

The Serie A side have a plan if that does happen, however, and that means turning to 20-year-old Nicolò Barella, for whom Cagliari allegedly want €50m (although he’d probably end up going for less).

The sale of Coutinho certainly won’t have helped this, and this is something Liverpool are going to have to deal with moving forward in January.