Home Premier League Chelsea “He’ll die for you” – Chelsea star on why Conte is “one...
SHARE

We had suspected that Alvaro Morata would give big interviews a swerve during the current international break, after some in the English media twisted his chat with Gazzetta dello Sport into something it never was.

Not to be silenced, Morata has granted a long interview to Marca, and part of the Spanish newspaper’s subsequent feature covers what the striker thinks of Antonio Conte.

Morata has been fond of Conte for some time, knowing the Italian wanted him at Juventus, and also being aware Chelsea tried to sign him a year before they managed it.

Working with the Chelsea boss has only served to increase the admiration: “Conte doesn’t like to lose even in training when there’s no opposition. That says everything. He is a winner and sometimes that marks his character.

“He is what you see. It’s a pure feeling, emotion, and that is why when we score a goal he is the first that celebrates it. He is one of the best coaches in the world, with a great personality and a very strong character. It’s a pride to be on his team because you learn and, above all, he transmits that winning mentality that is so necessary in a football team.”

Gushing eh. Marca then asked if Conte’s winning mentality is as big as it seems.

“If you’ll die for him, he’ll die for you. He’s a person that if you work and you’re on his side, you know you can take to the daily fight without problem.”

Asked about Conte’s training, Morata explained: “The ‘Italian Job’, the famous Italian work, that mixed with the Premier League, with the tactical, the videos, of gym with leg work… you arrive home and a nap is necessary. The problem is that you take a nap and you’ve lost your day. You wake up and it seems that you’ve already lost the day because it’s already night.” 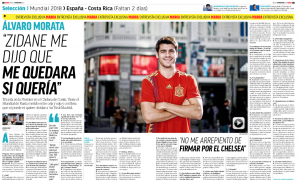 Morata had the chance to meet up with Jose Mourinho at the weekend, scoring the goal to beat Manchester United, and of course Marca wanted to know if anything was said between the two men: “I saw him before the game and we gave each other a hug. It’s football. Nothing else. I will always be grateful to him because he is the coach who gave me my debut in the Primera.”

The Sapnish newspaper then put it to Morata that Mourinho also fought to have the player at Old Trafford, to which the striker diplomatically said: “That’s what my father, Juanma, and people caring for me would know. It was Manchester United, it could have been another team.”

So which bits will get twisted this week? We’re predicting headlines about Conte wearing his players out, and the Mourinho hug.