Home Premier League Chelsea “The harder it gets, the stronger he holds on” – Manager praises...
SHARE

Observing that whenever he started Olivier Giroud, the Frenchman scored, Frank Lampard has given the striker a few more chances over the past few weeks.

They haven’t always resulted in a goal, like in the 1-0 defeat to Everton, but, more often than not, they have.

This is exactly why Didier Deschamps, despite his player’s difficult situations over the years, has always kept faith in the 34-year-old, and why he’s willing to do so again in the future.

There have often been small hints in press conferences that he wouldn’t mind seeing Giroud play for another club if it meant him featuring more often, but he’s never actively uttered the words that he wants him to leave Stamford Bridge.

Giving an interview to L’Equipe, the France national team manager was asked about the Chelsea man’s situation once again, where he explained exactly how he felt about it.

He said: “I’ve never warned him like some said I have. I’m not there to advise him. I just gave him my opinion. Beyond that, it’s his decision. Olivier knew his game time was limited at one point. He turned that around. Things changed. Just like it’ll likely change in February or March. 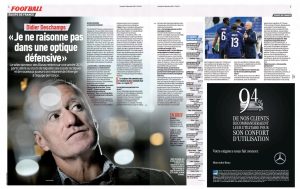 “But for him to be a starter three games a week isn’t ideal either. These days, I can’t give him a guarantee, not to him or others too. I have the fortune of having quality and quantity at my disposal”

Deschamps did however hint that Giroud would likely be a part of his plans in the future.

He added: “He’ll be around for a while longer, looking at his past performances… Less so than in the past because time passes, but for a while yet looking at his mental strength. It’s a merit to him for not letting go, but we know that: the harder it gets, the stronger he holds on”.

Despite playing just 523 minutes of football this year spread over 14 appearances, Olivier Giroud has still managed to score eight goals in all competitions for Chelsea.