We’re not going to lie, the spat between Pep Guardiola and all things Real Madrid is quite entertaining.

Both sides of the argument have got good points, to varying degrees, but it’s the clear distaste that everyone has for each other which provides for thoroughly coverable opinion pieces from the likes of Marca and others.

Let’s have a recap. The Manchester City manager said the best three teams of the past decade have been Barcelona, Bayern Munich and Juventus.

It’s quite some haul.

Anyway, the neutral would suspect Guardiola is leaving Madrid out because of his own Barcelona past, and that would then move on.

But not for the Spanish media, given the Barca/Madrid rivalry and how involved in it Guardiola is.

There were columns taking swipes at the Manchester City manager, and Santiago Solari said he thought leaving Madrid out was deliberate on the part of Guardiola.

The City boss again brought it up in his Friday press conference, explaining Solari hadn’t understood. He made it very clear he feels Real Madrid are ‘by far’ the best team in Europe over the past decade, but then said they’re not the best, or presumably among the best, when everything else (domestic trophies) is taken into account.

Of course, Marca have hit back.

In their Saturday edition, the Spanish newspaper say the manager is ‘putting a bandage on the wound’, trying to downplay his own failures.

Take it away, Marca:

‘Solari understands that Pep, the humble one, tries to put in value the titles that he has won. As he has not smelled them in Europe since he divorced Messi.’ 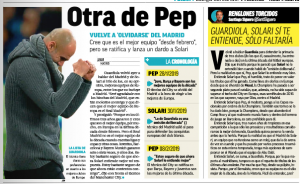 ‘Solari understands that Pep, the modest, put the National Cups above the Champions League. The tournaments that have also been good for him, because the Champions, since he left the Camp Nou… is a prohibited area for him.’

‘Because the reality is that Solari’s Madrid, a team that does not work like a clock, and has gone through several traumatic processes in this same season, have more options to win in the Wanda (where this year’s final is) than the Abu Dhabi team.’

Over to you, Pep.