Nicolas Pepe is likely to be a man we’re all going to be hearing a lot more about as the summer approaches, and with good reason.

Last season he scored 13 goals and made four assists for Lille, so the question this season was whether he could keep it up. Well, the 23 year old has 16 goals and eight assists in 23 Ligue 1 appearances in the current campaign.

L’Equipe have him as their third highest ranked Ligue 1 performer, based on average match ratings, behind only Neymar and Kylian Mbappe.

And there were claims this week from France that he’s interesting Barcelona.

That’s been picked up by Catalan newspaper Sport, who thoroughly agree.

In their Saturday edition, Sport say Lille are ‘ready to sell’ the player for around €50m. 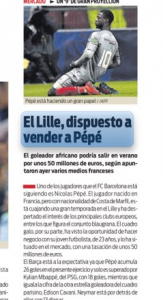 Barcelona are ‘aware’ of the player and he ‘enters the desired profile’.

The club are looking for a young No.9 who can act as support to Luis Suarez and eventually replace the 32 year old.

Kevin-Prince Boateng, 31 years of age, was an ’emergency solution’ on loan from Sassuolo and it’s ‘difficult’ to see him staying beyond this season.