Ever since Fikayo Tomori was sent on loan to Milan from Chelsea, there has been a feeling that the Serie A side wanted to make the move permanent.

The England international performed far better than many anticipated under Stefano Pioli, and the €28m pre-agreed fee looked like a bargain.

However, Italian sides are renowned for their sense of negotiations, and it was never going to be a straightforward operation, as discount talks were always going to be attempted.

This is what is currently happening between Chelsea and Milan, with Gazzetta dello Sport claiming a ‘dialogue’ has been opened to see if they can reduce the fee down from €28m.

It’s stated the ‘Tomori mission has come to life’ and ‘everything could be unlocked in a few days, if not a few hours’.

That timeframe ‘will depend on Chelsea and the willingness of the Blues to grant a discount to Milan, who have moved to lower the price’ of the young defender.

Should that fail, rest assured, the Serie A side would still purchase the player and make him a centrepiece of the their defence ‘for the next few years’. 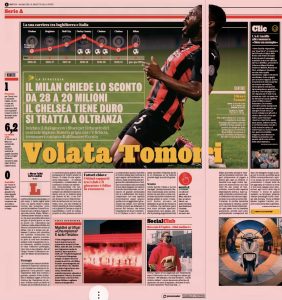 They believe ‘the expense would be worth the venture if it closed at €28m’, but it’s always worth giving it a go, although their first attempt of bringing the price down to €20m was batted away by the ‘historically tough nut to crack’ Marina Granovskaia.

There will be hope she can be swayed, perhaps by bringing the payments of the €20m closer together, but that still seems rather hopeful, especially when it’s been previously reported Chelsea aren’t exactly thrilled at losing Tomori in the first place.