Granit Xhaka’s transfer to Arsenal hasn’t been the disaster a lot would like to present it as. Labelled as a flop by many, Xhaka has taken his time easing into the Premier League and next year should see better things from the Arsenal midfielder.

Criticised overly harshly for his disciplinary record, with context often shredded, Xhaka is a favourite for the social media mockers, but he’s happy with his first season in the Premier League.

Quizzed on his campaign by SportBild, Xhaka explained: “I had the second most games in the squad, I couldn’t expect more personally. Unfortunately, we have missed our goal of coming in the top four, although we have made four points more than last season when Arsenal finished second. But I think we can be satisfied with the last third of the season, and winning the FA Cup has given us and our fans a bit more.”

SportBild inevitably wanted to ask Xhaka about Alexis Sanchez and Bayern Munich interest, and eased the Arsenal player in by asking if he’s scared his teammate will leave: “I hope not, of course. He has qualities on the pitch which are incomprehensible. He has made many goals, and is also enormously important outside.” 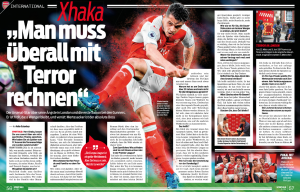 Then SportBild went further by directly asking if Sanchez is right for Bayern Munich, Xhaka replied: “Alexis can play with every world team – just like Mesut Ozil. I have been able to play with many great players, but these two stick out.”

The German magazine weren’t going to miss the chance to ask about Ozil, and wanted to know if Xhaka thinks the German will stay at Arsenal: “I think so. I owe him a lot, he helped me a lot at first.”

The Swiss international was slightly more positive on Ozil staying than Sanchez, but it’s clear Xhaka is a big fan of both.