Sunday’s edition of Record has a big article on the future of Adrien Silva and a potential return to former club Sporting.

With a new president now in place at the Lisbon club, and former chief Bruno de Carvalho, who had a fall out with Adrien, now more concerned with facing legal battles, the deal is seen as possible.

Record say there’ll be a ‘goodbye’ from Leicester City in the January window, and that he ‘will leave’ the club, presenting it as something which is happening.

Their sources at Sporting have made it clear the club are interested, but the financials of a deal would prove an issue. Either Adrien would have to reduce his wages, or Leicester agree to a loan and to cover part of the salary.

Record point out this is something which happened with Manchester United and Nani, when he returned to Sporting on loan, but they fail to mention that was part of the deal 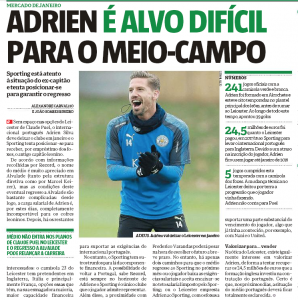 Sporting would have competition, it’s explained, and they say the player has ‘suitors in England, Italy and especially France’.