Home Europe “It was a good decision for me” – Defender ‘knew’ it was...
SHARE

Despite being a regular starter at Tottenham last year, Kieran Trippier was moved on by the club and sold to Atlético Madrid in the summer.

That left Mauricio Pochettino with Kyle Walker-Peters and Serge Aurier to choose from, and, well, the club’s form hasn’t been great of late.

There might not be any correlation between the two, but since his move away, Trippier has thrived in Spain’s capital, quickly becoming indispensable to Diego Simeone, which the England international loves.

Sitting down for an interview with Marca published on Monday, the defender was asked about Tottenham’s poor form this season, and it seems he saw it coming.

He said: “As a footballer, you know when you need to move. it was a good decision for me. It was easy to come to Atlético. I think this is the best place to progress as a footballer, with the best manager to play with and learn from”. 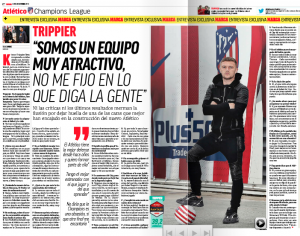 Strong words, considering he spent a number of years under Pochettino at Tottenham, but, then again, like many other people, it seems Trippier reached a point where a change of air was needed.

To be honest, it seems most of the Spurs squad would prefer to be elsewhere these days.