When Brighton & Hove Albion paid over £5m for Florin Andone, a certain amount of expectation was placed on the Romanian footballer.

Unfortunately for the now 26-year-old, he didn’t live up to it, and a season under Chris Hughton led to the goalscorer only finding the back of the net five times in 28 appearances.

Then came Graham Potter, and things looked like they could change, scoring from the bench in the season opening 3-0 win over Watford.

However, a red card 30 minutes into his first start to the season against Southampton meant he was back out of the squad, and that was the last thing he would do in a Brighton shirt this season.

A loan move to Galatasaray was organised late, one the club weren’t too keen on, but Andone pushed for it and got it.

Since then, he’s commented here and there on his situation, with certain sentences hinting he could be done at Brighton for good, but the forward made it clear in an interview with AS that wasn’t the case. 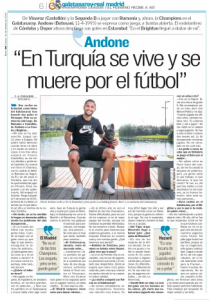 He said: “I was misunderstood and I want to make it clear. My year there was not what I expected. I missed that confidence in me. I didn’t play more than two games in a row as a starter. I don’t ask to play every game because I’m not a superstar. I just want continuity.

“I started to doubt myself, my abilities, if I really had the level for the Premier League. There were many disappointments. It’s not that I don’t want to go back. I respect Brighton. They signed me for six years and they are worrying about me. I just want to feel like a footballer. It all starts by finding the best version of myself and being happy”.

There’s hope he can get that in Turkey, and he’s shown he can be a valuable asset on Friday by bagging a brace against Sivasspor in a 3-2 win.

Perhaps it’s what he’s been waiting for, and next up for him will be hope he can make an appearance against Real Madrid in the Champions League.

As for a return to Brighton, Galatasaray never announced an option to buy, so any desire to keep the Romania international would have to be freshly negotiated with the Premier League side.