Home Europe “Why does he play so little?” – Newcastle player confused about Benitez...
SHARE

Surprisingly underused by Rafa Benitez despite spending close to £6m to acquire his services in the first place, Matz Sels is currently enjoying himself at Anderlecht on loan.

Earlier on Wednesday, we relayed his quotes in Sport/Foot about him not ruling out a return to Newcastle when his current deal with the Belgian side comes to an end, meaning he would likely team up once again with Chancel Mbemba.

The 23-year-old centre-back has made just 11 appearances all season, most of which came early on in the campaign, with the last one dating back towards the end of January in a 3-0 loss against Chelsea in the FA Cup.

The goalkeeper, however, is a bit confused as to why Benitez doesn’t trust him more. 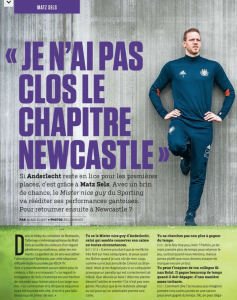 He said: “Mbemba, it’s a whole different kettle of fish. For me, he’s one of the best defenders at Newcastle. Why does he play so little? I don’t know what’s going on behind the scenes.”

It remains to be seen if both players mentioned in this article will even be at St James’ Park next year, but Sels will at least have a good loan spell behind him to try and convince Benitez.

The same cannot be said for the DR Congo defender.