This week’s edition of SportBild has a feature on Borussia Dortmund’s transfer plans for the summer.

Lucien Favre has several areas he wishes to add to, and the signing of Thomas Delaney has already been secured.

Despite bringing the Denmark international in, Favre is said to have more plans for his midfield, and SportBild say they’ve been told Victor Wanyama is a candidate.

The 26 year old’s phyiscal power is seen as a plus, and it’s a move thought possible because he’s ‘no longer a regular player’ for Mauricio Pochettino at Tottenham.

That sounds a little off. 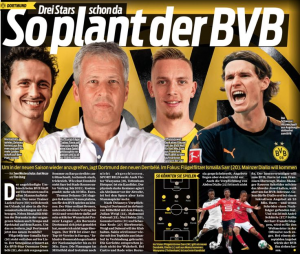 Wanyama picked up a knee injury in August and didn’t play again until January. Despite that he managed 24 matches for Tottenham last season, and it obviously would have been a lot more if not for the injury.

SportBild don’t provide any further information, and there’s no claims of talks or an estimated fee, just that Wanyama has been lined up as a possible signing for Borussia Dortmund.