Cenk Tosun may be the darling of Turkish football and an experienced international for the country, but he was actually born in Germany.

Tosun also started his football career in Germany, playing for Eintracht Frankfurt before moving to Turkey to see his career really take off.

There had been transfer interest in Tosun during the summer window, and then a brilliant first half of the season for Besiktas saw that interest, and his price tag, rocket. That made a move to the Premier League likelier than a return to Germany’s Bundesliga.

Signing for Everton on Friday, Tosun secured his much awaited move to the Premier League, and arrives at Goodison Park along with many good wishes from Turkey.

Bild wanted to get a slice of the action, and the German newspaper have spoken to Everton’s new signing, who sounds very pleased with his move: “I’m excited. And happy to be here in England.”

Everton’s manager has played a big part in the transfer, with Tosun explaining to Bild: “The coach Sam Allardyce absolutely wanted me.”

Allardyce may have had a lot to do with Crystal Palace interest in the summer, but the London club left things too late and missed their chance. Everton made sure, after some stuttering over the past week, they didn’t see Tosun go elsewhere.

It’s not just Allardyce who is an Everton motivation for Tosun, with the striker ready to learn from Wayne Rooney: “I hope to learn a lot from him. But I also have my strengths. I can use both feet and score goals in the penalty area. I want to show that here.” 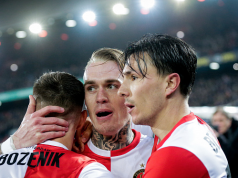 Southampton up against Schalke and Besiktas for signing – 25 year...