Crystal Palace have been linked with a string of goalkeepers for months, as the club looks to bring in some added strength in the position.

Vicente Guaita is one of the more unusual links. The 30 year old plays for Getafe and Crystal Palace links have emerged in the Spanish and English media over the past few days.

A report from Mundo Deportivo on Sunday suggests there’s something in it. The Spanish newspaper explain Getafe already have a plan in place to deal with a Guaita exit.

Guaita’s contract with Getafe ends in June and the goalkeeper ‘wants to try his luck in England’ according to Mundo Deportivo. Crystal Palace are the only club named, and the prospect of a January transfer happening is being taken seriously. 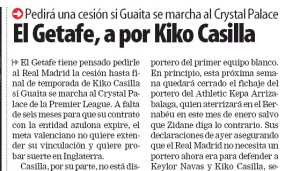 Getafe would then look to move in on Kiko Casilla, who is available for transfer from Real Madrid.

With the Spanish champions looking to sign Kepa from Athletic Club Bilbao, it makes sense for Casilla to move on.