After a year and a half, Arsenal decided Unai Emery wasn’t taking the club in the right direction and called a day on the Spaniard’s tenure at the Emirates.

Leaving the club languishing some way outside the top four in the Premier League, the former Sevilla manager was kindly asked to pack up his things and find himself a new job elsewhere, with the club handing themselves the task of finding the next man for the job.

Appointing Freddie Ljungberg as interim while they do, Arsenal’s board have been looking around Europe, and one of the names they quite like, at least according to France Football, is Thomas Tuchel.

Currently in charge of Paris Saint-Germain, the German has yet to fully convince everyone in the French capital, including the newly re-appointed director of football Leonardo.

It’s explained the club’s second half of last season still hasn’t been forgotten (knocked out of the Champions League by Manchester United, of the Coupe de la Ligue by Guingamp and losing the final of the Coupe de France to Rennes), and there are even rumours he’s ‘lost the dressing room’. 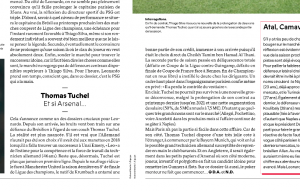 Despite recently extending his contract, Tuchel remains in danger of being dismissed if things don’t go to plan, especially with big names, like Mauricio Pochettino, currently looking for jobs.

But, if he does get sacked, a couple of clubs could be willing to welcome him: Bayern Munich and Arsenal.

For the latter, it’s said German is on their ‘good side’ as his ‘modern approach, playing good football with creative ideas and his ability to speak many languages’ make him a ‘suitable candidate to put the Gunners back on track’.

Maybe he is, maybe he isn’t, but he isn’t available right now, and with Ljungberg struggling in his first two games in charge, Arsenal might not have the luxury to wait for Tuchel to slip up.