Alexis Sanchez continues to be Chile’s greatest star, always receiving big attention from his home media. Local newspaper El Mercurio often put him on the front page of their sport section, and they have a very special reason for it today, as they claim he’s chosen his new destination.

Arsenal’s Sanchez said yes to an offer from Manchester City, according to the outlet. He wants to play in the Champions League and join Pep Guardiola, who he worked with during his time at Barcelona.

The decision was made during the Confederations Cup, as he had promised he would have a decision by the end of the tournament. El Mercurio has a few quotes from people close to the player, all unnamed, who are their sources for the story. 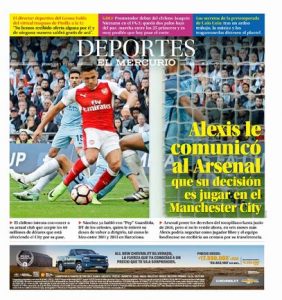 “Not having European competition at Champions League level is something unordinary for Alexis. He’s much motivated by playing in it, and of course, to win it,” one of the sources said.

“Alexis talked to many national teammates in Russia. He told them about the matter… he also spoke to his family. And all came to the same conclusion: that the best thing is to finish his cycle at Arsenal and go to Manchester City.”

It’s claimed that Manchester City have already made several offers for the player, with the latest one reaching US$60m (£46.5m). The problem is that Arsenal are not keen on making a deal.

So it’s not clear how the transfer would be made. Regarding leaving for free next year, when Sanchez’ contract expires, the newspaper was told that “Alexis isn’t willing to do that, for any reason. His idea is to leave right now.”

Although the cover of the newspaper’s sport section claims the player has already told Arsenal his decision, this fact is not mentioned or detailed in the article. The story only says the club is aware of his intention to leave, but there’s nothing about how or when Sanchez informed Arsenal he wants Manchester City.