Fulham have included FC Porto’s Zaidu Sanusi in their summer target list, according to claims coming out of Portugal today.

After spending a season in the second division, the Cottagers were successful in achieving promotion to the Premier League by winning the Championship, under the guidance of Marco Silva.

The Portuguese coach is looking at the Primeira Liga to strengthen his side’s squad, and has Zaidu in his sights.

Jornal de Notícias explain Fulham and Silva are interested in signing the left-back, who made 40 appearances in all competitions last season. 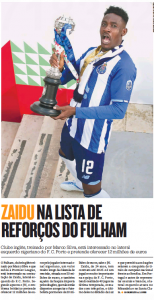 If Fulham were to make a proposal in that region, it is unlikely that it will be accepted by Porto because they will not let Sanusi leave for less than €20m.

With Fulham interested in the fullback, Jornal de Notícias don’t mention whether Silva’s side have an intention to meet Porto’s demands for Sanusi this summer.